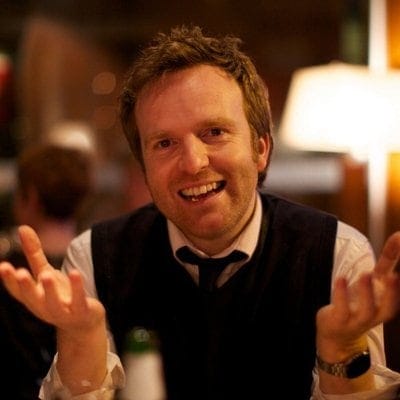 Seb Lee-Delisle is a digital artist and speaker who uses computers to engage with people and inspire them.

As an artist, he likes to make interesting things from code that encourage interaction and playfulness from the public. Notable projects include Lunar Trails, featuring a 3m wide drawing machine, and PixelPyros, the Arts Council funded digital fireworks display that toured nationwide in 2013.

As a speaker he demystifies programming and explores its artistic possibilities. His presentations and workshops enable artists to overcome their fear of code and encourage programmers of all backgrounds to be more creative and imaginative.

His recent work Laser Light Synths won the 2016 Lumen Interactive Prize. He won 3 Microsoft awards in 2013, and he was Technical Director on Big and Small, the BBC project that won a BAFTA in 2009.

Seb loves to strip down classic machines from the 80s, and give them an extreme make-over with cutting edge technology. You may have seen the hacked Nintendo light gun with laser, lights and a built-in smoke machine that became a viral sensation on the internet in 2016.

This insight into technology from a simpler age gives us a new found appreciation and understanding about the tools we use on a daily basis.